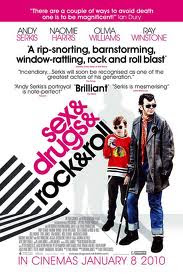 The outspoken entertainer Ian Dury was a remarkable and memorable figure on the British music scene; a proto-punk who came to fame in the era of The Sex Pistols and The Damned, and who was quick to lash out at anyone foolish enough to patronise or pity him.

Stricken by polio as a child, he walked with difficulty, with the aid of a cane and callipers, but was never one to let his disability prevent him from living a rich and full life – and a somewhat decadent, selfish and self-obsessed life, if this film is to be believed.

Together with his band The Blockheads, Dury had several hit songs in the UK music charts in the late 1970s and early 1980s, including the 1979 number one, ‘Hit Me With Your Rhythm Stick’, as well as the singles ‘Reasons to be Cheerful, Part 3’, ‘I Wanna Be Straight’, and the anthemic ‘Sex & Drugs & Rock & Roll’, which was banned by the BBC upon its release in 1977. Many such songs feature on the soundtrack of Sex & Drugs & Rock & Roll, performed by Andy Serkis, who plays Dury, together with the original members of The Blockheads.

This frenetic film by first-time feature director Mat Whitecross avoids the traditional narrative pitfalls of the biopic genre, which at their worst tend to be a limply ordered progression of key events in the subject’s life from birth through to death; but nonetheless it fails to completely satisfy, primarily due to flaws in the screenplay by Paul Viragh, which keeps any sense of emotional connection with the story at arm’s length until the final, melodramatic act.

Opening with a shot of Dury addressing an empty theatre – a scene that instantly reminded this reviewer of the recent British film Bronson, a fevered biopic about the most violent prisoner in the UK penal system – Sex & Drugs & Rock & Roll uses animation, flashbacks, live performances, dream sequences and first person narratives by Dury to tell the story of the man’s ‘mad, bad and dangerous to know’ rise from sickly child to full-blown rock star.

Williams and Harris in particular excel with their roles, bringing warmth and depth to their somewhat two-dimensional characters. They are ably supported by the likes of Noel Clarke, Arthur Darvill, Ray Winstone (as Dury’s distant but loving father) and Toby Jones as a callous orderly who sparked the young Dury’s earliest rebellions – one of several moments in the film offering pop psychological explanations for Dury’s wild and indulgent lifestyle.

The movie’s energy and good humour are undeniable, and its production design vivid and memorable, but it never really gets beneath the surface to give a convincing depiction of Dury’s complex personality, being more content to observe rather than analyse. Nonetheless, thanks to a magnificent performance by Serkis and the vivid, expressionistic and anarchic style in which Dury’s story is told, it very much entertains.

Rating: Three and a half stars

Posted by richardwatts at 10:37 am